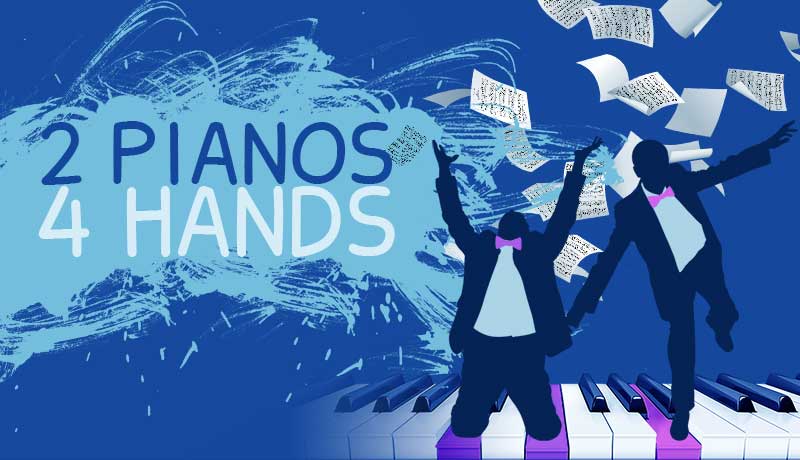 For anyone who grew up where at some point in their life they have been exposed to musical education, you’ll definitely relate to “2 Pianos 4 Hands” now playing at the Milwaukee Repertory Theater.  The Rep is back in full force and kicked off their 2019/2020 Season with this musical comedy which is showing in the Stackner Cabaret.  This season at the Rep is stacked with great plays and musicals alike and “2 Pianos 4 Hands” did not disappoint.

I grew up as a choir kid beginning in kindergarten where I joined the children’s choir at my church.  Music class was always a strong subject area for me in school and in fifth grade, I began playing the clarinet.  Once I got to middle school, I quickly found out the only way to succeed and excel in music was to begin taking private lessons so my musical career* was born.  (*We’ll use the term career here loosely.)

Through middle, high school, and college, much of my free time was devoted to the clarinet.  Private lessons, practicing at home, and going to the band room during study halls and lunch became the norm for me.  Learning all of the scales in the circle of fifths, chromatic scales, how to play in 4/4, 2/4, 2/2, 3/4, 6/8 (and many more), and all of the musical terms required to understand how music is to be played became a huge part of the knowledge occupying my brain and my vocabulary.

“2 Pianos 4 Hands” is the story of two childhood friends who spent their entire upbringing chasing the goal of becoming professional classical pianists who ultimately didn’t make it.  For someone like me, who initially was chasing a music minor in college with the hopes of someday being in the music business, this show literally struck a chord.  (Yes, I know that was a great musical joke.)

Joe Kinosian who played Ted and Ben Moss who played Richard were not only extremely talented actors but phenomenally talented pianists.  Although they are the only two actors you’ll see on stage, they portray dozens of great characters from demanding parents, eccentric music teachers, and college professors who casually crush all of their hopes and dreams of having a successful career in music.

Although the show ends in a bit of a minor key (spoiler alert – they don’t make it as professional classical musicians, not really a spoiler because it’s pretty evident this is the case from the opening scene of the show),  “2 Pianos 4 Hands” is an incredibly relatable show for anyone who has ever chased a dream and didn’t quite make it, even if that dream wasn’t necessarily a career in classical piano.  It was a great performance both musically and theatrically and I’d highly recommend for a light-hearted night out.

Don’t forget, you can dine in the Stackner Cabaret where they have a full menu and a prix fixe menu option each night.  Not interested in dinner?  Have a drink instead!  I’d highly recommend sharing the carafe of wine which is usually what my friend Laura and I do when we attend shows, like this one, here together.  There are a variety of tap beers, wines, and cocktails and even a seasonal beverage menu which also looked pretty tasty.