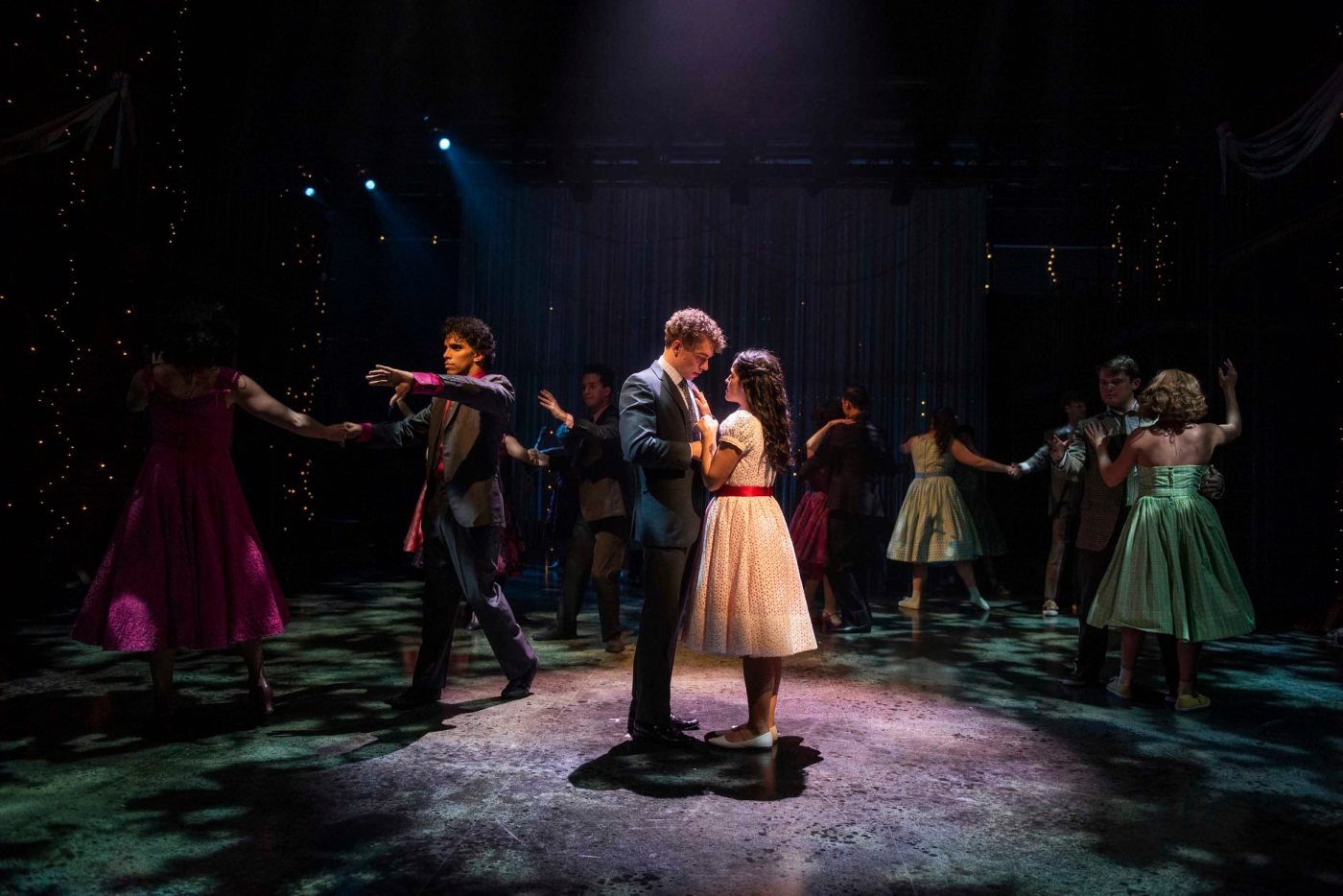 I can’t pinpoint the exact moment when I first fell in love with West Side Story but I remember being enamored with this Romeo and Juliet inspired love story from a young age.  The Sharks and the Jets, Tony and Maria, Officer Krupke – I loved it all.

When my friend Laura and I attended the Rep’s 2019/2020 Season Preview back in February, they teased and teased and teased which the musical would be for Artistic Director Mark Clements 10th season with the Milwaukee Rep.  10 years ago, Mark brought the first musical, Cabaret, to the Rep, the first musical performed on the Quadracci Powerhouse stage.  The Rep was teasing out what the musical could be and I kept telling my husband Tyler, if it’s West Side Story I’m going to completely lose my mind.

So, at the event in February, they announced every show for the season except the musical.  Then, music started playing.  I pride myself on being extremely good at “name that tune” especially in situations like bar trivia where you have to identify songs with only a few bars of music being played.  If you ask my dad, he would tell you this is because I spent more time listening to music as a kid than working on my addition, subtraction, and multiplication.  Thus why I am still terrible at math but can recite to you lyrics of songs that I haven’t heard in years.  Anyways,  I think maybe three measures of the song started playing and I looked at Laura with extreme excitement and said, “IT’S WEST SIDE STORY”.  The song playing was “Something’s Coming” and I knew from that moment indeed something was coming, something GOOD.

I have been waiting for months for this moment with a level of anxious anticipation like a child on Christmas day.  The moment where I would FINALLY see West Side Story brought to life on stage after years of watching the movie and listening to the soundtrack over and over again.

The Milwaukee Repertory Theater’s adaptation of West Side Story in a word was incredible.  I had high expectations of the show after being a fan for 28 years and never having seen the show brought to life on stage.  Of all of the productions I’ve seen at the Rep, and trust me, I’ve seen some incredibly high-quality theater here, West Side Story is by far my absolute favorite.

The 6-person orchestra started playing and brought the soundtrack I’ve listened to for so many years to life.  But of course, it was so much better than the soundtrack.  You could hear every major melody, every harmony, and every detail in-between.

Enter the actors.  Flying over the iconic chain link fence that you picture when you picture the set of West Side Story.  Dancing all over the stage in colorful Puerto Rican inspired and 50’s teenage gang member garb, every detail was created with perfection.   I totally felt like I was at the park, the gymnasium for the iconic dance scene – MAMBO, or under the highway bridge with the Sharks and Jets.  This show had set design, costuming, and propping that was spot on.

If you are familiar with this show, you know that Tony and Maria have very distinct sounds not only in their speech but their singing.  I cannot commend Jeffrey Kringer (Tony) and Liesl Collazo (Maria) enough for their stellar interpretations of a Polack from New York and a Puerto Rican immigrant.  The songs that many people know and love were brought to life in a beautiful way by these two.  Their chemistry on stage didn’t leave you feeling like you were watching theater but that you were watching true love unfolding on stage.

Something unique to this adaptation was the modernization of the show with updated choreography.  Jon Rua is best known for his roles in early runs of both In The Heights (Sonny, Grafitti Pete, Usnavi standby) and Hamilton (Charles Lee and Hamilton standby) as well as Patchy the Pirate in the original Broadway cast of Spongebob Squarepants but the Rep snagged him up to choreograph their adaptation of West Side Story. #RuaWestSide  The choreography was definitely what I felt gave this particular production of a classic musical its own personality and flare.  The use of different styles of dance was super interesting and not at all what I would have expected in certain parts of the show.  The fight scenes were FANTASTIC and probably the most realistic of any fight scene I’ve seen in a theatrical production to date.

I could go on and on raving about this show but I’ll give it a rest so you can go purchase your own tickets for the show.  If you’re interested in checking this out you better hurry because tickets are going quicker than the Sharks and Jets can rumble.  I’d give this 5 out of 5 stars and here’s the real testament of its greatness – even Tyler suggested we go to see it again so there you go, it has the Tyler stamp of approval as well!

West Side Story runs through October 27 and tickets are selling fast!  Tickets for the show can be purchased online, by calling the Milwaukee Rep’s ticket office at 414-224-9490 or visiting the ticket office in-person at 108 East Wells Street, Milwaukee, WI 53202 while it is open Sunday – Friday from Noon – 6:00 PM.